Opioids are a class of drugs that include the illegal drug heroin, synthetic opioids such as Fentanyl, and pain relievers available by prescription such as codeine, oxycodone, Vicodin, morphine, and others.

All opioids are chemically related and interact with opioid receptors on nerve cells in the brain and on the spinal column. Opioid pain relievers are generally safe when taken for a short time and as prescribed by a doctor, but because they produce euphoria in addition to pain relief, they can be misused (taken in a different way or in a larger quantity than prescribed, or taken without a doctor’s prescription). Regular use—even as prescribed by a doctor—can lead to dependence and, when misused, opioid pain relievers can lead to addiction, overdose, and death.

An opioid overdose can be reversed with the drug naloxone (Narcan) when given right away. Improvements have been seen in some regions of the country in the form of decreasing availability of prescription opioid pain relievers and decreasing misuse among the Nation’s teens. However, since 2007, overdose deaths related to heroin have been increasing. Fortunately, effective medications exist to treat opioid use disorders including methadone, Buprenex and Vivitrol.

A National Institute of Drug Abuse (NIDA) study found that once treatment is initiated, both a Buprenex/Vivitrol combination and an extended-release Vivitrol formulation are similarly effective in treating opioid addiction. However, Vivitrol requires full detoxification, so initiating treatment among active users is difficult. These medications help many people recover from opioid addiction.

What are Prescription Opioids? 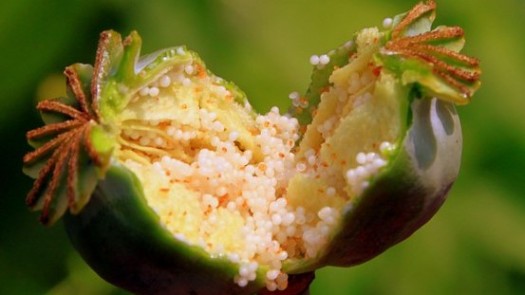 Opioids are a class of drugs naturally found in the opium poppy plant. Some prescription opioids are made from the plant directly, and others are made by scientists in labs using the same chemical structure. Opioids are often used as medicines because they contain chemicals that relax the body and can relieve pain. Prescription opioids are used mostly to treat moderate to severe pain, though some opioids can be used to treat coughing and diarrhea. Opioids can also make people feel very relaxed and high, which is why they are sometimes used for non-medical reasons. This can be dangerous because opioids can be highly addictive. Overdoses and death are common. Heroin is one of the world’s most dangerous opioids, and is never used as a medicine in the United States.

How Do People Misuse Opioids?

How Do Prescription Opioids Affect the Brain?

Opioids bind to and activate opioid receptors on cells located in many areas of the brain, spinal cord, and other organs in the body, especially those involved in feelings of pain and pleasure. When opioids attach to these receptors, they block pain signals sent from the brain to the body and release large amounts of dopamine throughout the body. This release can strongly reinforce the act of taking the drug, making the user want to repeat the experience.

Opioid misuse can cause slowed breathing, which can cause hypoxia, a condition that results when too little oxygen reaches the brain. Hypoxia can have short- and long-term psychological and neurological effects, including coma, permanent brain damage, or death. Researchers are also investigating the long-term effects of opioid addiction on the brain, including whether damage can be reversed.

What are Other Health Effects of Opioid Medications?

Older adults are at higher risk of accidental misuse or abuse because they typically have multiple prescriptions and chronic diseases, increasing the risk of drug-drug and drug-disease interactions, as well as a slowed metabolism that affects the breakdown of drugs. Sharing drug injection equipment and having impaired judgment from drug use can increase the risk of contracting infectious diseases such as HIV.

More than 64,000 Americans died from drug overdoses in 2016, including illicit drugs and prescription opioids. This number has nearly doubled over the past ten years. 2015 was the worst year for drug overdoses in U.S. history. Then 2016 came along. In that year alone, drug overdoses killed more people than the entire Vietnam War did. 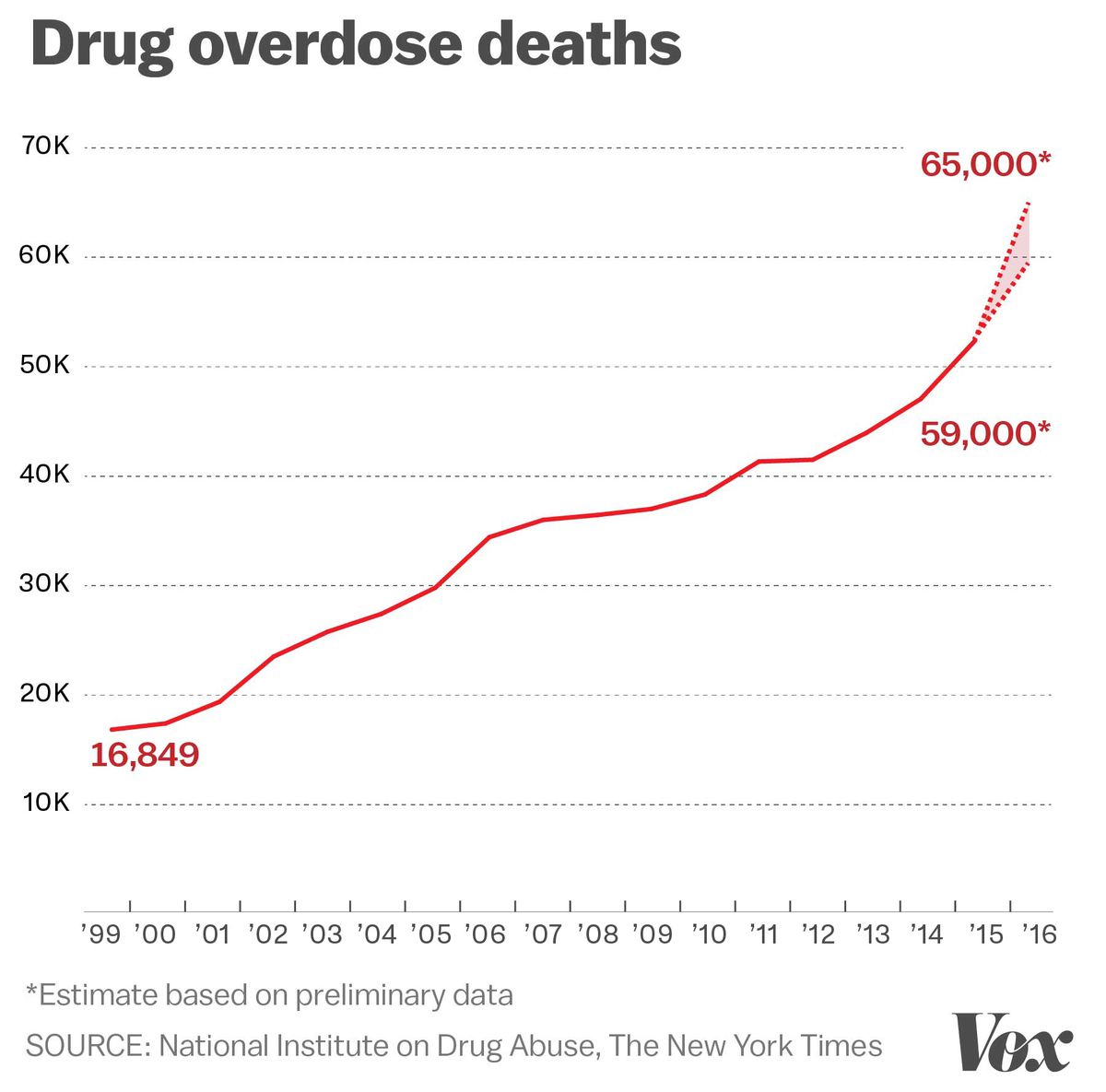 This latest drug epidemic is not solely about illegal drugs. It began, in fact, with a legal drug. Back in the 1990s, doctors were persuaded to treat pain as a serious medical issue. There’s a good reason for that: About 100 million U. S. adults suffer from chronic pain, according to a report from the Institute of Medicine.

Pharmaceutical companies took advantage of this concern. Through a big marketing campaign they got doctors to prescribe products like OxyContin and Percocet in droves — even though the evidence for opioids treating long-term non-cancer related chronic pain is very weak despite their effectiveness for severe short-term, acute pain—while the evidence that opioids cause harm in the long term is very strong. So painkillers inundated society, landing in the hands of not just patients but also teens rummaging through their parents’ medicine cabinets, other family members and friends of patients, and the black market.

What Can We Do?

Seeing the rise in opioid misuse and deaths, officials have cracked down on prescription painkillers. Law enforcement, for instance, now threaten doctors with incarceration and loss of their medical licenses if they prescribed the drugs unscrupulously. Ideally, doctors should still be able to get painkillers to patients who truly need them — after, for example, evaluating whether the patient has a history of drug addiction. But doctors, who weren’t conducting even such basic checks, are now being instructed to give more thought to their prescriptions.

Yet many people who lost access to painkillers are still addicted. So some who could no longer obtain prescribed painkillers turned to cheaper, more potent opioids bought off the street, such as heroin and Fentanyl. Not all painkiller users went this direction, and not all opioid users started with painkillers. But statistics suggest many did. A 2014 study in JAMA Psychiatry found many painkiller users were moving on to heroin, and a 2015 analysis by the Centers for Disease Control and Prevention (CDC) found that people who are addicted to prescription painkillers are 40 times more likely to be addicted to heroin.

So other types of opioid overdoses, excluding painkillers, also rose. That doesn’t mean cracking down on painkillers was a mistake. It appears to have slowed the rise in painkiller deaths, and it may have prevented doctors from prescribing the drugs to new generations of people with drug use disorders. But the likely solution is to get opioid users into treatment. According to a 2016 report by the Surgeon General of the United States, just 10 percent of Americans with a drug use disorder obtain specialty treatment. The report found that the low rate was largely explained by a shortage of treatment options. Given the exorbitant cost of health care in America today, that is simply unacceptable. Federal and state officials have pushed for more treatment funding, including medication-assisted treatment like methadone and Buprenex.

I Look Foward to a Dialog on This. Please Comment. Cancel reply

a resource for moving poetry

DarylMadden
Poetry for the People

Exploring the Ordinary to Find the Extraordinary

From The Darkness Into The Light

The War is Over
Reflections from the Pew

"And the Word became flesh and made his dwelling among us, and we saw his glory!" John 1:14

THE BRIDE OF CHRIST
The Accidental Apologist

We Are Free Indeed

My Bible Reading, Listening and Living

revelations and reflections from my daily devotion

The Power of Story

The Literary Magazine of the Osterhout Free Library

Serving a little poetic nourishment every morning. Start your day with our new expanded menu. Poems, of course, are our specialty. But we will also be serving a fuller menu that includes poetry book reviews to feed poets' and poetry lovers' souls.

Everything I Never Told You

Lucidly in shadows. Poetry from a hand that writes misty.

Living the hope that comes from Christ